Hay is one of the most essential parts of your guinea pig’s diet, and the little critters sure do eat a lot of it!

If you own guinea pigs or are considering adopting one, you probably have many questions about how to offer your piggies hay, mainly how often it should be changed and replaced and when to know it’s time to swap it out for fresh hay.

Your guinea pig should have a hay rack with constant access to as much as they need to eat in a day, which for most pigs is a pile roughly the size of their entire body. The hay will usually need to be entirely changed out at least once or twice a week or whenever it appears dirty or stale.

Keep reading to learn everything you need to know about providing your guinea pigs with the freshest, tastiest hay possible.

We’ll go over when and how to change it out, what to look for when assessing its freshness, why your piggy needs it in the first place, and what kinds of hay are the most nutritious and tasty for your pigs.

Why Do Guinea Pigs Need Hay?

In addition to a small supply of healthy foods like fresh vegetables and fruits, all guinea pigs need a constant, unlimited supply of hay to munch on.

It’s one of the most critical parts of their diet, and they need it not only to stay healthy but to survive.

Ideally, hay should make up around 80% or more of your guinea pigs’ diets.

Essentially, hay helps to facilitate proper digestion and keeps your piggies’ teeth from growing out of control or developing a painful dental disease.

As they are rodents, their massive incisors constantly grow for their entire lives, so they have to do a lot of chewing to keep them filed down to a reasonable, comfortable level.

Grasses like hay are perfect for this chewing behavior and essential for a healthy diet.

Hay is dense and rigid enough to file down their teeth and offers plenty of fiber to keep their fast-moving digestive systems functioning properly.

You’ve likely already noticed your piggies poop a LOT–probably more than any animal you’ve ever cared for or seen before.

Healthy guinea pigs should poop at least 100 times a day, so they’re constantly either eating, pooing, or, amusingly, doing both simultaneously.

Hay keeps their food intake up and facilitates this rapid digestion. If their digestive tracts stop moving for even a few short hours, they will die.

Finally, hay is also delicious to guinea pigs, as they are herbivores who greatly enjoy its natural, grassy flavor.

In short, your piggy should always, always have hay around to chew on to stay healthy and happy.

Learn more about what guinea pigs need to eat.

Where Should You Put Hay In Your Guinea Pig Cage?

It’s best to have a designated hay rack or container to place your guinea pigs’ hay in, mainly to keep it raised slightly off the ground away from the constant stream of pee and poops your pigs will produce regularly.

This also signals to your pigs they’ll always have a reliable spot to go to find hay, which will keep them comfortable and happy under your care.

We recommend using a hayrack like this one, as it keeps the hay in a designated, secure area where it’s slightly raised off the cage’s floor. 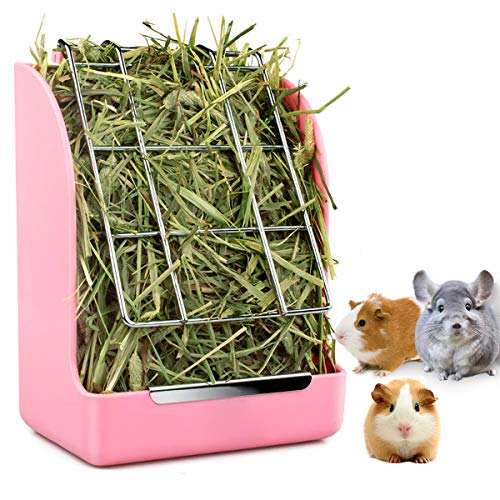 Racks like these often also have a simple means of attaching them to the side of your pigs’ enclosure.

This way, your pigs won’t be able to toss it around and spread it throughout their cage.

If you keep your hay in a typical plastic or ceramic food dish with the rest of their staple, basic foods like a cup of pellets, you’re bound to end up with pigs who regularly make a mess.

On a side note, make sure you use quality pellets as part of their basic foods, too; they need good fiber on top of the hay.

You’ll have to clean the food bowl more often and replace the hay much more often.

Keep your pigs’ hay rack in the same area rather than moving it around to reassure your pigs they’ll always be able to easily find it. This will keep your hay fresher and cleaner for longer.

Keep the freshwater away from where your pigs typically prefer to poo and pee.

Keeping a water bottle with fresh, clean drinking water nearby will also be greatly appreciated by your pigs when they inevitably become thirsty after eating.

Some guinea pigs simply go wherever they feel like it, while others prefer to eliminate their waste in a specific spot each time–it depends on their personalities.

Either way, keeping the hay in a rack will at least keep it from coming in direct contact with their waste.

How Often Should You Change Guinea Pig Hay?

Generally, it’s best to completely change your guinea pigs’ hay at least once or twice per week to keep it fresh, tasty, and clean.

Most pigs can empty an average-sized rack weekly, so with multiple guinea pigs, you’ll need to increase the rate at which you replace it.

In addition to its regular food supply of fruits, vegetables, greens, and commercial food pellets, the average guinea pig will eat hay roughly the same size as its entire body every day!

This sounds excessive, but their fast digestive systems mean they require a high-fiber diet and near-constant food intake.

Depending on your setup and how many guinea pigs you own, how often you replace the hay will likely vary from week to week.

Sometimes, you’ll need to change it after just a day or two, while in other cases, you’ll be able to make it a full week without changing.

Additionally, if any of the hay looks wet, dirty, or your pigs outright refuse to eat it, it’s time to completely replace all the hay in the rack.

Many piggies are somewhat picky eaters, and they’ll avoid their hay if it smells strange to them or is dirty.

Some guinea pigs are so picky; they’ll only eat brand-new, fresh hay every time!

Though this seems annoying and unreasonable, think about it from their perspective; you wouldn’t want to touch old, dirty, or stale food either, so why would you give your pets anything less than the best?

What Kind Of Hay Is Best For Guinea Pigs? 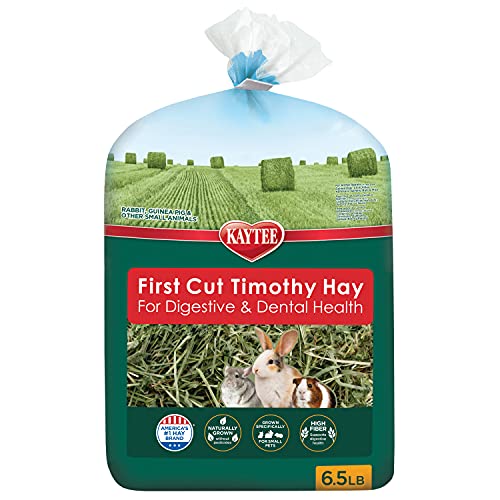 A few particular types are healthiest and tastiest for them, namely timothy hay, orchard grass, and oat hay.

All three are nutritious and full of fiber to keep your pigs’ teeth trimmed and their digestive systems moving along as expected.

There are many different manufacturers and suppliers from which you’ll be able to quickly source your piggies’ hay.

Most pet shops carry a few varieties, and it’s also possible to order it online, either in smaller bags like this one or in bulk, depending on how many guinea pigs you own and how much they tend to eat.