Are you considering breeding pet snakes?

Did you find a baby snake on your property?

While some mama snakes will stick around to protect their young for up to two weeks after hatching, most snakes will entirely abandon their young immediately after laying the eggs or after they hatch. Different species of snake will handle their young in different ways.

If you’re interested in learning more about these variations, this article has the answers you need.

How Long Do Snakes Stay With Their Babies?

Snakes are precocial creatures, a word that means they can survive on their own immediately after birth.

They are born with all the abilities they need to survive, including vision, hearing, movement, hunting instincts, and, in the case of venomous species, fangs and venom.

Venomous baby snakes will usually be born with venom, which is just as potent as their adult counterparts!

While some mama snakes do stick around to care for their young during the early stages, many baby snakes enter the world alone and must adapt quickly.

Baby snakes must immediately begin hunting to feed themselves, as mama snakes do not produce milk or otherwise hunt to feed their young.

Most snakes are oviparous, meaning they lay eggs.

Some snakes will stick around their nest of eggs for protection and incubation, while others will do their best to lay the eggs in a relatively protected area, so they don’t need to stick around.

A few species of snakes do have stronger maternal instincts, which compel them to stay with their eggs for a more extended period to protect and nurture them.

These include pythons, vipers, and garter snakes.

Pythons will guard their eggs until they hatch, leaving their side only to bask in the sun if the cold temperatures are too much to bear.

They don’t even leave to eat and will strike at any predators who dare to come too close.

While most pythons will abandon their young as soon as they’ve hatched, the African rock python will guard its young for around two weeks.

This gives them ample time to grow to a larger size, enabling them to hunt for prey more effectively, protect themselves from predators, and tolerate colder temperatures.

Vipers include rattlesnakes and copperheads, among many others.

Unlike pythons, vipers are viviparous, meaning they give birth to live young.

Like the African rock python, vipers will stick around and defend their neonates until they are about two weeks old, which correlates with the age at which they first shed.

This is especially important for rattlesnakes, as rattlesnakes cannot create sound with their tails until after shedding twice.

The additional protection until their first shed increases their chances of reaching a second shed, after which they are better equipped to protect themselves and ward off potential predators.

While they don’t care for their young for as long as vipers do, they still keep their babies company for a few hours to a few days.

Uniquely, garter snakes are one of the only species of snake which prefer the companionship of other garter snakes rather than living independently.

This makes them suitable for snake owners who want more than one snake but would rather house them together.

While most snakes would not cooperatively coexist with another snake and would even eat their own eggs or young if left together for too long, garter snakes will calmly cohabit with a fellow garter snake.

How Many Baby Snakes Are Born At A Time?

Oviparous (egg-laying) snakes produce fewer babies in one round than an ovoviviparous or viviparous snake.

Live litters average around eleven babies, while the average oviparous snake will lay around seven eggs in one clutch.

Of course, there are always exceptions to the general rules.

The number of baby snakes produced in one litter or clutch is generally dependent on the natural presence or absence of predators.

If a particular snake species is more worried about predators, they will have more offspring to increase their reproductive success.

Even if many of the young are killed off, there will be many others who survive.

Likewise, snakes without as many natural predators will produce smaller litters.

The largest documented litter was a whopping 156 babies owing to a puff adder.

On the other end of the spectrum, species like the Madagascan ground boas produce litters that contain around six young.

What Do Baby Snakes Eat?

Because they cannot rely on their mothers for feeding, baby snakes are immediately responsible for finding and hunting their food.

Unlike larger, older snakes, baby snakes require more frequent feedings to keep up with the energy needed to help them grow and thrive.

While adult snakes can go for several days to a couple of weeks without a fresh meal, baby snakes generally need to eat about twice a week.

This is also due to their smaller size and inability to store as much energy in their bodies.

Although most adult snakes target rodents as their prey, baby snakes are too small to consume such large pieces of prey.

Instead, they hunt smaller protein sources, such as insects, small lizards, frogs, toads, newts, and eggs.

The type of prey a baby snake chooses to pursue will depend primarily on its habit.

Any snake which is well-adapted to the water may feed on small fish or leeches.

Desert snakes will have better access to lizards and insects, making this the preferred food source.

Snake owners or breeders can specifically order newborn mice, which are called pinkies.

These baby rodents are tiny, making them easier for a baby snake to consume.

As long as the prey is not larger than the diameter of the snake’s largest width, it will be capable of eating.

Also, make sure you’re not feeding your baby snakes live mice or rats!

These can cause injury to your critters by fighting back.

Especially if the struggle ensues in the baby snake’s mouth, this can result in a condition called mouth rot.

If left untreated, mouth rot will interfere with a snake’s ability to eat and result in death.

While it’s not difficult to take them to the vet for treatment, it’s easier and cheaper to prevent the condition.

If you want to learn more, we have a post on what newborn baby snakes eat dedicated to the topic. 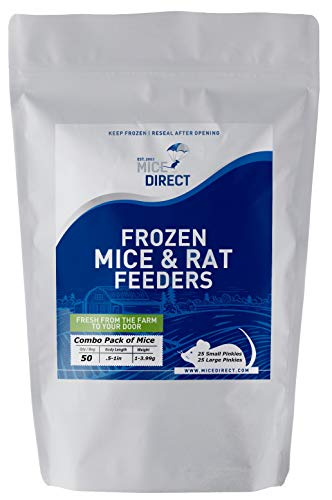 How Big Are Baby Snakes?

Baby snakes range in size, and a good predictor would be the size of the adult snake.

Smaller snakes tend to have smaller babies, while larger snakes will have babies which reflects this difference.

If you’re interested in learning more, check out how big baby snakes are for more detailed information on this topic.

How Often Do Baby Snakes Shed?

While adult snakes can go months without shedding, a well-fed baby snake will shed every few weeks.

This allows them to make the room as they continue to grow.

There are a few signs which indicate when a snake is shedding.

This is the beginning of shedding eye caps, which loosens up to shed with the overall piece of skin.

The scaling itself will appear more dull or hazy.

If you have a snake at home, you’ll probably see them spending more time in their water bowl, as keeping their scales moist will help with the process of shedding.

They also rub up against rougher surfaces in their environment for some mechanical help with removing their shed.

It can take baby snakes anywhere from a few hours to two weeks to shed.

If you notice any difficulties or incomplete shedding, check the environmental parameters to ensure they’re within the normal range.

Reptiles & Supplies
Ready for a new reptile or need supplies?

We've partnered with XYZ Reptiles to bring you an excellent selection of pet reptiles and the supplies you need to keep them healthy.

When looking at how long baby snakes stay with their mother, the answer depends.

Most don’t stay with their mother at all, and the rest do so for a short period.

Baby snakes are born with the necessary abilities to take care of themselves in the wild, meaning they don’t need to be monitored or cared for by their mothers.

If you ever see a baby snake out in the wild, know they’re probably out here learning the ways of the world all on their own!