Are you looking into getting one of these cute reptiles, but you want to know a little more about their eating habits?

Do you worry your chameleon pet isn’t eating enough?

As with all pets, a healthy and steady diet is important to keep them alive as long as possible.

Chameleons and reptiles have much different eating habits than we do, and you may find yourself wondering:

How often do chameleons eat?

Chameleons eat every other day, and their meal should be 10-15 minutes long. During this time, you should feed them as many crickets as they’ll eat. Make sure the crickets are smaller than the width between their eyes.

Read on for more details and answers to questions related to a chameleon’s diet.

What To Feed Chameleons

Unlike some reptiles, they don’t leave a big mess from their food, and you don’t need to worry about how much of each food group to give them.

Except for a few specific chameleon species (which aren’t usually kept as pets), most chameleons are strictly insectivores, which means they eat only insects.

For pet chameleons, the staple food is cricket.

Crickets are a great choice for chameleons because they come in a small enough size, have decent calcium and other nutrient content, and provide a healthy protein to fat ratio.

Crickets are also quite affordable.

The cricket is a staple for many insect-eating pets, and so there are plenty of pet stores and online retailers selling them in mass quantities.

Other insects are often too big for some pet chameleon species, such as the Jackson’s chameleon which is quite small (no bigger than a finger).

Learn more about the smallest chameleons.

Crickets will be more than enough for any chameleon.

You just need to make sure the crickets are smaller than the width between the reptile’s eyes.

If the crickets are too large, there’s a chance the bug could choke the pet.

This is still a small chance, but the invisible threat is of impaction.

Impacted food is when the food is stuck in the digestive tract.

This won’t immediately choke the chameleon but could still cause severe, even deadly, complications.

At best, the choked food is vomited out by the chameleon, which still causes undue stress on the reptile’s body.

More likely, the impacted food puts too much pressure on the spinal cord and nervous system of the pet and causes temporary paralysis.

If left unchecked, this temporary paralysis may cause the chameleon’s body to shut down and die.

The lesson to be learned here is to watch the size of the crickets.

Look for food smaller than the width between their eyes.

How Often To Feed Adult Chameleons

Adult chameleons only need to eat once every two days or every other day.

When it comes time to feed them, set aside 10-15 minutes for its meal.

At mealtime, place a few crickets in the cage in front of the chameleon, so the reptile takes notice.

Then watch as the chameleon eats the crickets.

If you use cricket pellets or frozen crickets, don’t be surprised if the chameleon doesn’t show interest right away.

Chameleons’ hunting instincts don’t kick in unless they recognize the insect as food.

After the cricket eats a few of the insects, put some more in.

Don’t just release a bunch at one time, or you’ll have a mess and an overstimulated chameleon.

Keep feeding crickets to the chameleon a few at a time for the whole 10-15 minutes you have designated as mealtime.

The chameleon may get full and stop eating.

If it does, remove the crickets still in the cage and consider the meal over.

Once the time is up, you should stop feeding the chameleon as well.

In some cases, the reptiles will overeat to the point where they get sick.

Too much feeding will cause them to become obese.

Just like with people, being overweight or obese is hard on the body and may shorten life span dramatically.

Brumation And Its Impact On Feeding

During brumation, chameleons may not eat much at all.

In late winter/early spring, the chameleons will naturally go into brumation.

This is sort of like hibernation, except instead of going into a deep sleep for the colder months, chameleons slow down their bodies’ function to survive.

During this time, the chameleon won’t move much or eat much.

You should still offer it food every 3-4 days, but it may not eat every time.

However, when it starts to move more and eat more energetically, brumation is ending, and you should increase the feeding frequency back to normal.

Misting for drinking and humidity should still be done around twice per day.

Even if the chameleon doesn’t actively drink as much during brumation, it still absorbs some through the skin.

How Often To Feed Baby Chameleons

Baby chameleons are a different story when it comes to how often you should feed them.

As with all infant and juvenile animals, they tend to eat more often until they reach their optimum size.

When you feed them, they should still eat as much as they can for the 10-15 minutes you carve out.

Just as with adults, you should only put in a few crickets at a time.

Baby chameleons will need to eat 1-2 times per day.

From birth, we suggest starting with two meals per day but watch for the animal’s cues.

If the chameleon doesn’t eat much or at all for the second meal, it doesn’t need twice per day feedings.

By the time the chameleon is six months old, you should be down to once per day or starting every other day.

9-12 months of age marks adulthood, and when you should commit to every other day.

It’s even more important now to make sure the size of the crickets is below the width marker.

Crickets will grow under your care, so check each cricket before you put it in the cage.

When in doubt, don’t feed it to your pet.

While crickets are all you need for a healthy diet, there is still a high likelihood of your reptile developing calcium deficiencies.

This is common with all reptiles, including chameleons.

But there are two simple ways we recommend combating this problem.

First is to sprinkle a calcium supplement powder over the food every meal.

This supplement allows the chameleon to get extra nutrients to stay healthy.

You need to be careful when buying these supplements.

Make sure they’re from a reputable company and designed for reptiles. 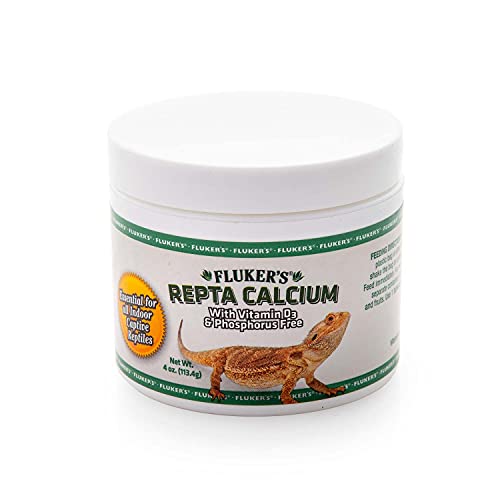 The other method is to gut load the crickets.

Gut loading is when you feed the crickets a meal jam-packed with nutrients 24 hours before their meal with the chameleon.

This allows the nutrients to be in the crickets’ systems when they’re eaten.

This method is much more effective at passing on nutrients, but it requires more work on your part.

Feeding healthy vegetables and fruits to the crickets will work well, but if this is too much work, feel free to buy a gut loading cricket food.

As usual, we do love this gut loading food by Fluker’s. 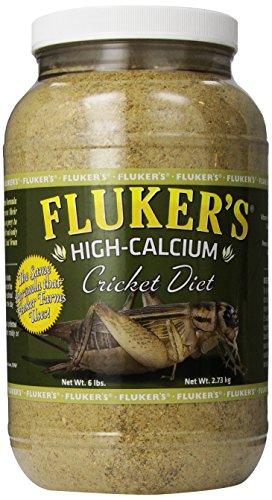 It’s full of good nutrients and easy to feed to the crickets.

To ensure your pet’s health, you should provide calcium supplementation with every meal.

Gut loading would be best, but if this is too much work, there is a compromise.

Sprinkle the powder on the crickets for every meal, and make sure to gut load the crickets once per week (or every three feedings).

But wait? You may ask, If feeding crickets fruits are good for them, why don’t we just feed the chameleons fruit?

This would make sense if the chameleons were natural omnivores, but they’re not.

Chameleons have evolved to digest insects.

This doesn’t mean it’s impossible to feed them fruit.

In general, avoid fruits with seeds and any large amount of citrus to them.

Don’t feed them fruit on the same day or before their main cricket meal.

If you put the fruit in front of them, and they’re uninterested, don’t push it.

For more details, check out what fruits are safe to feed to chameleons.

Every other day may not seem like a lot, but for chameleons, this is plenty.

As long as you feed them a steady diet of crickets which have been sprinkled with a calcium powder supplement or gut loaded 24 hours beforehand, they’ll be more than satisfied.

You may supplement with certain fruits if you wish, but the primary source should be crickets and insects.